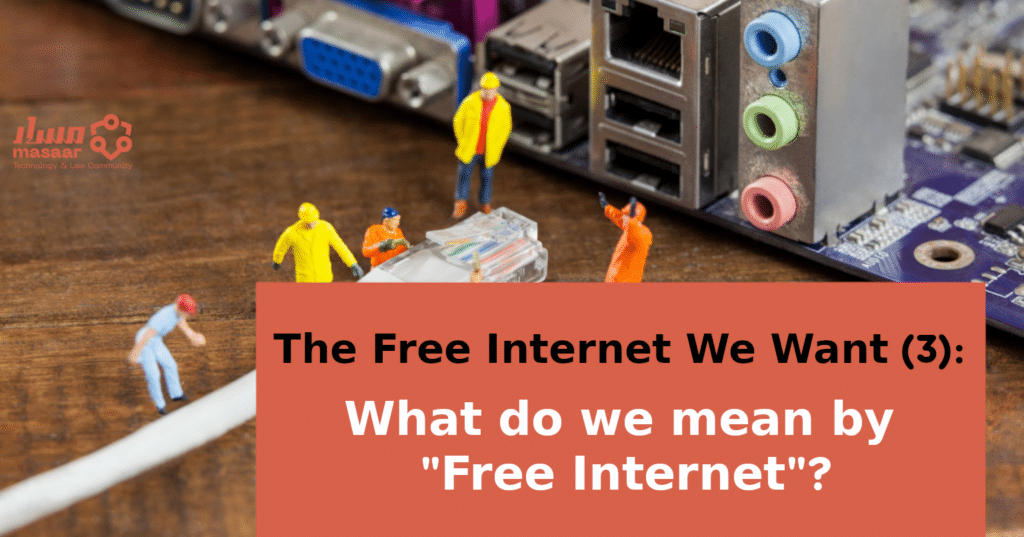 The Free Internet We Want, is a series of research papers:

As a network in actual reality, the Internet is millions of devices connected to each other. It is a decentralized network, nobody can control the connectivity of all its devices, and nobody can stop it everywhere at the same time. However, if one day you wake up to find that Google services have stopped working, this would mean for many that most of the Internet as they know it has disappeared, and probably gone with it a large portion of their personal, and work-related data. Additionally, this would paralyze some of us to a large or little extent: you won’t be able to exchange emails with anybody, some of you might not be able to communicate without it at all, as you may not have other means connecting you to them, many work tasks won’t be doable, and the way, that became usual for years now, to collaborate with work colleagues won’t be available. What is worse is that many of the other websites’ services will become inaccessible for you because you used your Google account to register your accounts on them, so your access to these services depends on Google services being available to authenticate your identity.
This nightmarish situation is not totally unlikely as many might think. Our dependence on the Internet in our daily life has grown tremendously in the last few years, especially with the large expansion of smartphones. This dependency is not a problem in itself, on the contrary, it makes so many of our lives’ daily affairs easier, faster, and better, the problem is that we do not depend on the Internet, we depend on services like Google and Facebook. These services are the Internet for most of us, if they disappear, for any reason, the Internet we depend on in our daily lives, would also disappear, which means that our lives will be paralyzed, at least for some time, that much of our personal memories, our work, etc. are lost. The Internet itself will not be affected, physically, by missing any service provided through it, such services would only be thousands of devices that exited the network. This is the practical difference between the fact that the Internet, in physical actuality, is a decentralized network, and the fact that it is for many of us a highly centralized network: because every communication we have with it goes through one node, like Google, thus in case it disappeared, our connection to the Internet would be practically severed, though it will still be out there.

What do we mean by the “Free Internet”?

The centrality of the user, not the service

If we want to summarize what is meant by the previous points, and how they relate to the concepts of centralization and decentralization, we may express this by saying the free Internet as it should be for everyone, is a network each one of us is its center. This means that as a virtual node of the network, he/she should be able to communicate with any other node as if he/she were the center of the network that everything passes through. Within a centralized network, the user is isolated from the network and can only access what is made available by the service that he/she has become its captive. The user centrality also means that he/she alone controls his/her experience dealing with the network. He/she determines where their data is, chooses the suitable method to protect it, who might access it, and their access to it is never obstructed at any time. They also choose with whom to communicate and meet and with what criteria. They decide on what information they want to access, from which source, based on what criteria, and in which form. They are able to express their opinions, and ideas in the form they prefer, guaranteed to reach whoever chooses to be exposed to them, without limits imposed by a third party.
The free Internet is this network that we as users have the freedom to use its different services in the way most suitable for our needs and compatible with our tastes, without being exposed to any dangers to us or to our data. Such network that each of us experience as if he/she were its center, and should have no other center, i.e. it should not be centralized itself. As the Internet is physically a decentralized network, while the technologies of developing and offering service through it force its centralization, alternative technologies can allow the development and deployment of services in a decentralized manner. This is not only possible theoretically, but it is possible in actual reality. There are many technologies already available and capable of supporting a decentralized Internet. In the next part of “The Free Internet We Want”, we will explore alternatives to centralization and what technologies may make them available.