Statement from global civil society on the impact of Facebook, Google and Twitter: Concern for democracy and human rights must not end at the US’s borders 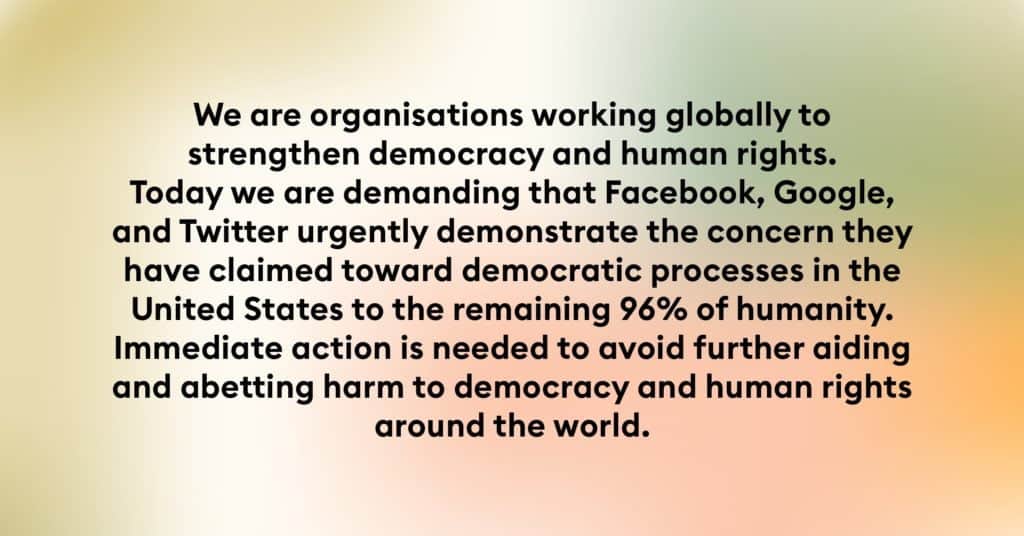 We are organisations working globally to strengthen democracy and human rights. Today we are demanding that Facebook, Google, and Twitter urgently demonstrate the concern they have claimed toward democratic processes in the United States to the remaining 96% of humanity. Immediate action is needed to avoid further aiding and abetting harm to democracy and human rights around the world.

With great sadness, but scarcely any surprise, we watched on 6th January as hate speech and incitement to violence — much of it coordinated and amplified on platforms run by Facebook, Google, and Twitter — culminated in white nationalists storming the United States Capitol in a bid to interfere with the electoral process.

These companies continue to make ad hoc decisions that have a dramatic impact on democracy — on the one hand deplatforming Donald Trump while at the same time amplifying hateful content around the world and silencing voices critical of oppressive governments. Yet the decision-makers at these corporations are democratically unaccountable and alarmingly selective in the arenas they care about.

For many years, we have been dismayed by the disparity and unfairness with which resources have been devoted by these platforms to protect the integrity of the online information space and prevent harm. The countries we are working from, from Iraq to Sierra Leone to India, have been forced to contend with the role played by Facebook, Google and Twitter in the harassment of human rights defenders, threats to freedom of speech, the incitement of religious violence, and misinformation and disinformation which has been used to justify human rights violations and interfere with civic processes and progress on public health and climate change. The hatred allowed to flourish online on these platforms has a body count.

The lives and societies of people in the rest of the world, especially the Global South, are worth no less than those in the United States. A knee-jerk response for a few select markets might be easier and cheaper for the companies, but not appropriate for defending democracy and human rights. Instead, and until democratic governments pass appropriate regulation, the companies must:

Engage experts and civil society at the local level, without stipulating non-disclosure agreements, in building transparent and coherent content moderation and recommendation decisions aligned with human rights frameworks, and enforce these guidelines consistently in the local context.
Significantly scale up content moderation teams at the local level staffed by human experts in safe conditions with localised knowledge, including fluency in the language of the country and understanding of the political context. These teams must be further scaled up in times of elections, social movements or conflict and given the resources necessary to address local risks.
Work with third-party fact checkers with local contextual knowledge to provide corrections to all users who have seen or interacted with verifiably false or misleading information.

States remain the ultimate duty-bearers for upholding human rights and democracy. However this is neither the first nor the last time that these three major platforms will play a critical role in shaping the future of democracy and human rights. As they become a crucial part of the global public square and the rules they write have an inordinate impact on human rights and democracy everywhere in the world, it is incumbent upon them, upon individuals, civil society, and governments to take this grave threat seriously.