Sandvine … the surveillance octopus in the Arab region 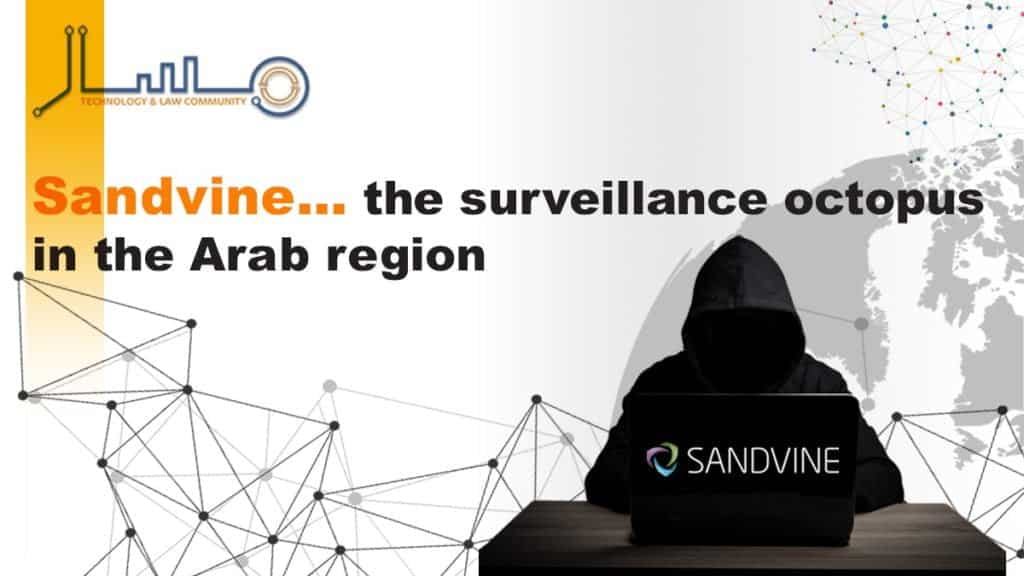 Partnership and business agreements between Arab governments and corporates on the one hand, and foreign companies working in the internet and communication surveillance industry (software/hardware) on the other, is currently witnessing an increase in rate and scale. The aim is to manipulate the flow of information, restrain freedom of expression, and control internet and communication systems to curtail the use of free cyber and communication space by activists calling for political and social change as platforms for solidarity, mobilization and organization. Arab regimes even cooperate with each other in this regard, reaching the point of buying espionage soft/hardware for each other, as when the UAE bought spying devices to Egypt.

To be sure, the scene as regards importing, operating and using this espionage soft and hardware in the Arab world is very complicated. Many international corporations involved in producing this kind of equipment and applications are very active in the Arab region; for example: Gamma Group, Blue Coast Systems, Ercom, Hacking Team, Amesys, and the Israeli NSO are all working in the region.

This report reviews the activities of Sandvine; a company whose name has been in circulation in the past years for being active in the field of developing, manufacturing and operating software and equipment used by governments as tools for internet surveillance. In relation to this, the report monitors a number of deals concluded by this company with Arab governments and companies, which represent a threat to the freedom of expression, the free flow of information, and the right to privacy.

Sandvine in the Arab region

Sandvine operates in more than 50 countries, including countries in the Middle East and North Africa. In 2018 for example, a Citizen Lab1 report highlighted widescale government use of Sandvine’s “Deep Packet Inspection (DPI) devices to deliver nation-state malware in Turkey and indirectly into Syria, and to covertly raise money through affiliate ads and cryptocurrency mining in Egypt”2.

Another report by Qurium3 revealed that Zain, a Jordanian telecommunications company, used Sandvine products for website blocking and internet surveillance. Also, and in 21 September 2020, a joint report by Egyptian Al-Manassa website and Qurium said that Sandvine’s devices had been used in Egypt, to block websites and implement DPI technology in the infrastructure of some internet and communications service providers in Egypt.4

Masaar (Technology & Law Community) maintains that Sandvine’s activities violate internet users’ rights, as per the freedom of expression, the free flow of information, and the right to privacy. Governments use Sandvine’s services and products to illegally reveal the identity of internet users and block their outreach to specific internet content. This report represents an initial effort to draw the map of the extent of Sandvine’s infiltration into the Arab region. We call upon journalists, researchers, and techies to join us in this effort, to uncover the company’s involvement in human rights violations.

History of Sandvine and Procera merger

We noticed that Sandvine5 has the same postal address as BAE Systems6 in Israel. BAE sells surveillance and spying systems to Arab regimes7. 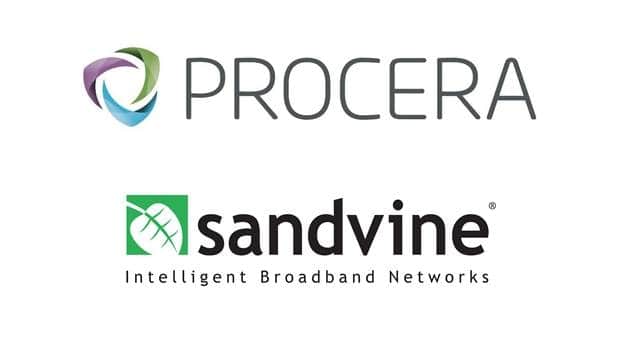 While we were searching for information on Sandvine’s office in the UAE, we noticed that several of the current employees in the company were previously hired by ‘Giza Systems – the Egyptian Systems Company’. (Giza Systems was previously involved in importing the Finfisher software -a Gamma product, and Narus System software -a Narus product).

In April 2017, Procera Networks announced a multi-year, multi-million-dollar partnership with Vodafone Egypt. The company’s statement said “Procera was selected for the deployment after a competitive evaluation due to the strength of their virtualized solution offering for subscriber experience analytics, even as encryption becomes prevalent on the Internet”. The statement added that Vodafone will acquire PacketLogic solutions27, which are DPI devices that were previously used in Turkey to spread malware. It should be added here that the wave of website blocking in Egypt started at the end of May 2017, one month after the conclusion of the Procera-Vodafone deal.

It was revealed that website blocking in Egypt was implemented through two technologies that allow internet censorship. The first is the PacketLogic DRDL engine, that gives the service provider the ability to curtail access to some websites and inhibit the use of some protocols, in addition to real-time data transfer surveillance, and other services28. The second is the CoreCard technology, a tool that allows network surveillance and helps in analyzing user behavior. According to the company, this technology was designed to help service providers to abide by the changing laws and facilitates the needed transfer to a new infrastructure in accordance with the new laws29.

This is an international company working in more than 70 countries. It has offices in several regions and states, including Morocco, Bahrain, Qatar, Kuwait, Saudi Arabia, and UAE. In February 2020 ‘Westcon Middle East’ signed an agreement with Sandvine30 to market and distribute the latter’s products, services and solutions. This partnership was agreed upon in context of Sandvine’s strive to expand its operations in the Middle East and Turkey31.

MITTCO is based in the UAE. It is part of the Omani Suhail Bahwan Group and has a representation office in Dubai. The Suhail Bahwan Group oversees the operations of 40 companies, including Bahwan for Information Technology and Bahwan for Projects and telecommunication. MITTCO started its partnership with Sandvine early on, in 2005, and the aim was to provide clients in UAE with the company’s solutions.

In 2014, Du (the main service operator in UAE) acquired from Procera Networks the PacketLogic 10000 solution for Deep Packet Inspection (DPI)33.

Computer Information Systems (CIS) was established in Lebanon in 1979. It serves as a provider of information systems in the information and telecommunications market (ICT) in Europe, Africa and the Near East. It also has expertise in distributing integrated technical solutions.

CIS is a partner of Sandvine since 2012. The group says on its website that Sandvine’s solutions have been provided to a number of companies, among them: Algerie Telecom, Orange RDC, Telkom Kenya, and MTN Business Kenya34. The group also says that its partnership with Sandvine includes DPI solutions.

The company has several business relations with Arabic telecommunications companies, for example:

In 2014, A piece of news published on Sandvine’s website said that the company received a multi-million US dollars order from UAE’s Itisalat. It added that Itisalat is one of Sandvine’s clients since 2006. The afore mentioned order is part of a multi-year multi-phase planned project that will cover Itisalat’s fixed and mobile networks, as Sandvine is considered one of the best companies to provide services like network analytics and usage administration35.

In 2018, Sandvine announced a partnership with Saudi Mobily to provide the latter with Active Network Intelligence solutions36.

BARQ Systems was established in 1993 in Jeddah (Saudi Arabia) under the name SALEC. It specializes in telecommunications and information technology. It opened an office in Cairo in 1999 (the company’s headquarter is currently in Cairo, with an office in Riyadh, another in Jeddah, and a third in UAE).

An Emirati company which has offices in Egypt and Kenya, in addition to its main office in Dubai. EliteVAD provides a number of services related to information technology, including services provided to law enforcement bodies.

EliteVAD is a partner of Sandvine, and it provides the PacketLogic solutions to its customers. As the company says on its website it designs its services to deliver “the best subscriber experience possible for analytics, traffic management, and enforcement use cases”39. The company, as it appears, has operations in several countries. A current EliteVAD employee says their number has reached 37 countries.

At the end of 2012, King Saud University highlighted in a statement that it started to apply Procera Networks’ PacketLogic solutions (as we know, Procera is now ‘Sandvine’). The statement added that the university did not solely seek to have the power to control but hoped for more: acquiring the ability to monitor and check all what’s going on in the cyper space, to ensure “the best use of the network’s resources”40.

A ‘Qurium’ report said that Zain, a Jordanian telecommunications company, uses Sandvine’s products to block websites and censor the internet.

ONYXES is a pioneer in providing information technology solutions and services in Iraq. It started its operations in 2011 as part of the MARCH Holding Group, which, in turn, works in different industries in the Middle East (the public sector, oil and gas, communications, banking, health services). The company has offices in Egypt, Iraq, UAE, and Afghanistan, and has joint ventures with a number of telecommunications companies like Zain and Check Net and AsiaCel41.

It has been revealed that one of the engineers of ONYXES passed a training course in operating the PacketLogic software which is used in internet censorship.

‘Network Solutions and Services Company’ was established in Jordan in 2000, as a provider of telecommunications and information technology services. It is one of Sandvine’s companies in the Arab region42.

Al-Yagoot is a Yemeni telecommunications company that works in the communications and information technology sector. It was established in 2000, and it provides several services like installing and operating digital security software, in addition to training and technical support43.

It is clear from this exposition that Sandvine is involved in activities that violate the freedom of expression, the right to privacy, and the right to have access to information. Despite the fact that it is true that international human rights commitments fall only upon states and governments, yet international law has developed in recent decades to allow for a greater corporate responsibility. Corporates have to abide by the standards of human rights and make sure that any of their activities do not violate the basic rights and freedoms stated in international treaties and national constitutions and laws. The Egyptian authorities, in its turn, is committed to make sure its information technology business deals are not in contradiction with its responsibility to respect and enhance human rights44.