Clubhouse(2): How to Protect Your Privacy and Digital Security 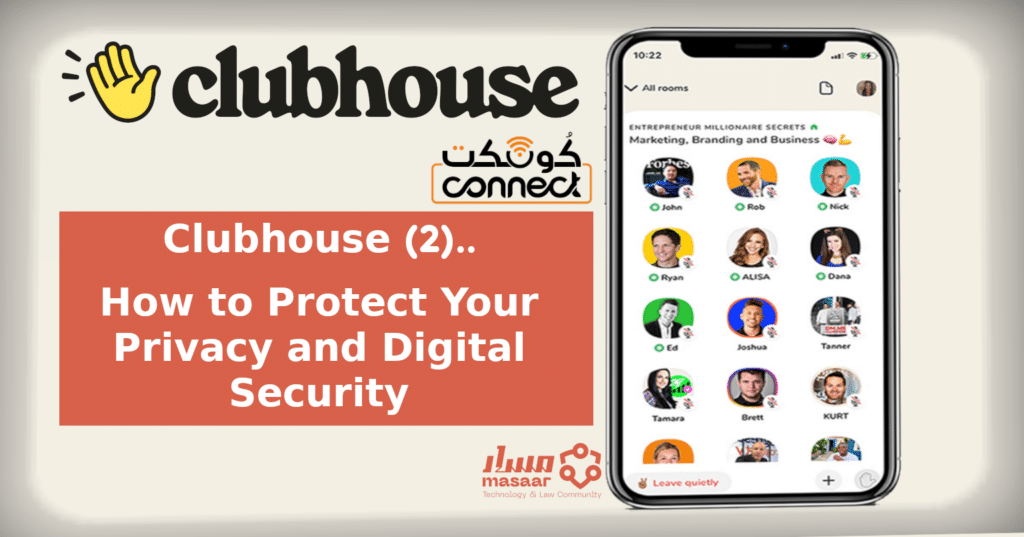 In a previous article, we discussed “Clubhouse: Security and Privacy Issues“.

Clubhouse offers a tool for audio communication that can be used to participate in discussing points of view about different topics and to interact with them. The application also allows much freedom and ease for creating rooms and discussing political, religious, sexuality, and sexual topics, which are taboos in many societies and countries, and that led many users to anonymity and concealing their true identity, by using symbolic pictures instead of personal photos, and fake names in place of their real ones. The question still however is, are hiding personal photos and using fake names guarantee that individuals on Clubhouse are not recognized and their identities are not revealed? Generally, not using personal data and photos in Clubhouse -as well as in other social media platforms- helps people not to be immediately recognized. However, when it comes to how effective it is in protecting the secrecy of accounts owners’ identities, we should talk about the means through which information and data are capable of revealing a Clubhouse -or other social media means- account identity.

As it is the case with other applications and services used by individuals for communication and public space activities, Clubhouse users may expose their data that are stored within their accounts to leaks if they neglected protecting their digital privacy and security. This is true even in the case of using an anonymous or fake account. In the following we mention some pitfalls:

We have discussed above some methods and techniques that can be used for revealing accounts and individuals identities on social media networks, either by governments or individuals, the most serious danger however resides in any hacking or data leakage operation which social media companies themselves can be targeted with, especially if the company collects accounts data in one place including account name, phone number, and e-mail address. This is what happened in the last few months when a database containing more than half a billion Facebook accounts data were leaked. The leaked data contained names, phone numbers, and e-mails for the accounts. A few years ago, as well, LinkedIn was subject to a leakage operation where e-mail addresses and passwords of 164 millions accounts were published. Additionally hundreds of hacking and leakage operations occurred, you can find out about them via Have I Been Pwned site.