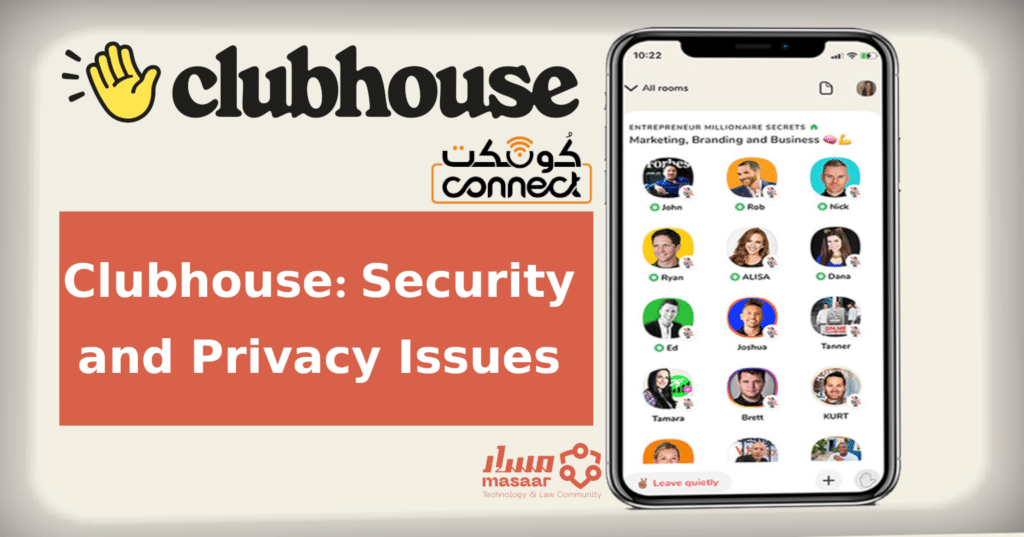 In March 2020, Clubhouse was launched as one of the startup social media applications, it depends on direct audio communication only. The application acquired wide attention in many countries and communities, especially after Elon Musk joined it in last January. Now, around half a million rooms are created on the application every day.

As other social media means, Clubhouse faces basic issues concerning security and privacy. This issue is justified when it comes to Clubhouse for the importance of topics presented and discussed through it, which never lacks political, religious, gender, and sexual conversations which are taboos in many countries and societies.

Invitation to join the application

Before launching the latest release of the application, where the invitations system was canceled, the application acquired more than 30 million users. All these accounts publicly included the name/account that made the invitation for someone in the “Nominated by” field. This may cause security, social or cultural problems for either party, due to the stances or statements of the other party within the application, whose location conditions may allow more freedom of expression, especially considering the security and social mentality prevailing in some countries and societies. This led many persons to communicate with the company asking for the link to those who invited them to be removed after some of them were subjected to harassment because of opinions voiced by those who invited them to the application. The company was responsive to some of the requests but not to the others.

The application needs a number of factors to determine which rooms should be visible for users when they sign in, most importantly are the persons, accounts, or clubs one follows. This procedure is similar to Twitter.

The lists of accounts and clubs users follow are public in Clubhouse, anyone can see them, and the application does not allow hiding the lists or controlling access to them, which may expose the account owner to social or security harassment, as happened before with Soha (fake name), an activist who was questioned by a security agency in Syria because of her following of Facebook accounts and pages which are critical of the regime.

Who listens to what

One of the publicity means Clubhouse uses for promoting available or active rooms is sending notifications to accounts following users when they join a room. Additionally, the application has a page that lists all active accounts and the rooms their owners are in at the time. This information is available for everyone mutually following the account.

This is completely different from browsing Facebook for example, as one may access any page or public group and read posts and conversations without his/her friends knowing about this activity. It is also the same with Twitter and Instagram.

This prevents many from joining rooms with controversial titles, whether political, religious, or sexual, as the general idea is that joining a room means approving its title and whatever is said in it, or at least being interested in the topic or the title. This actually is not necessarily the case however, many thus are led to create accounts with fake names so that they can join any room without being embarrassed, ashamed, or questioned.

Creating a Clubhouse account depends on phone number, as activating an account and verifying its ownership is done by sending a code in an SMS to the phone number. This is also the case when trying to sign-in to the account from a new device. The fact that the application is satisfied with a code sent through SMS for signing-in into an account, is not a good policy at all. It may cause accounts to be easily pirated, as there are many ways for obtaining the code sent to the phone number by hackers. It is also possible to obtain a line sim chip with the same number (SIM swapping), depending on social engineering and other methods like involving a phone company employee. Something similar did happen to Jack Dorsey, Twitter CEO, whose Twitter account was hacked in 2019.

Texting within the application

In mid-July, Clubhouse added the option of texting within the application, which had a wide popularity. The company has mentioned that more than 90 million text messages were sent in the first week after activating the feature.

This feature, while important, is considered as an unsafe communication mean, for several reasons:

There are two kinds of session recording in Clubhouse:

The company however did not explain if it might use records for any other purpose, like voice recognition technologies, or if it will share records with third parties. The company’s policy does not mention how long a record is kept in case of a complaint.

What steps Clubhouse should take to enhance security and privacy?

Although Clubhouse is a startup application and the company responsible for it is a small one considering human resources, as the number of its employees is about 58 persons, but as the application is widely popular, which can’t be separated from the nature of topics and conversations made through it; the company is required to focus more on security and privacy aspects of the application which should include:

With the beta version over, and making the application public by canceling the invitations system, the company should stop linking accounts to phone numbers, and allow registration with an e-mail address, while keeping registration with phone number optional, as is the case with Wire for example, which will facilitate not revealing the identity of accounts, especially in case company’s data is leaked.

This is by adding settings within the account allowing users to control:

Clubhouse should increase the security of the sign-in process by adding or making Multi-Factor Authentication available so that the account owner can add a password, secret code or additional verification means besides the code sent by SMS. Such system is available in messaging applications like Signal and Whatsapp.

Texting within the application is undoubtedly a very important and necessary feature, but Clubhouse should use a more secure messaging system through an Open Source encryption protocol that encrypts messages end-to-end, with allowing messages deletion.

The company should work on getting rid of unofficial copies of the application, whether they work on phones, PCs, or 3rd party platforms, as they allow access to rooms and accounts data from outside the application. It already happened last April that data of 1.3 million accounts were collected and published.

At last, it should be noted that Clubhouse is a social media platform, it is not a safe communication tool. It is not designed for this purpose in the first place. It also does not satisfy the minimum requirements of security and privacy, as the company is able to access the contents of public and private audio conversations, as well as textual messages. Additionally, any attending person can record and publish a session with no knowledge or approval of the speakers.

One more aspect that has nothing to do with the company, the nature of Clubhouse operation depending on audio rooms and chat, is considered a very important source for companies and individuals for collecting a large number of voices, which easily allow Machine Learning for voice recognition, which in turn can easily be used in Deep Fake operations for a person, and can be abused or cause security and social problems, especially with rapid technical evolution, that uncovering such forgery would become so difficult.