Legal Controls for the Use of “Drones” in Egypt 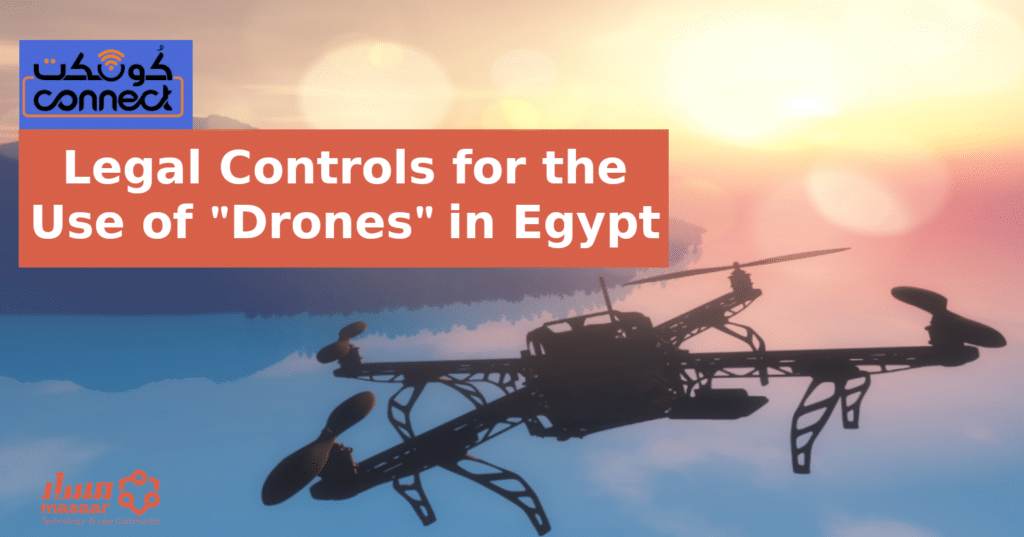 During the recent few years, drones have had multiple uses, other than the military use, where advancements in technology have led to expanding its use for civil and commercial purposes by many companies. For example, Google has acquired Titan Aerospace which is specialized in the Drone Industry and used its products to provide Internet in remote areas. Facebook has done the same. There is also Amazon, which uses the same technology to deliver orders to its customers.

In addition to many other companies that use drones in various activities, such as the use of these drones to spray large areas of agricultural land with insecticides, monitor oil and gas pipelines, monitor any leaks, explosions or fires, or the tendency to employ “drones” to provide humanitarian aid in remote areas or for delivery of medicines and treatments needed by hospitals or needed in an emergency.

In light of the rapid development in the civilian uses of “drones”, the Egyptian legislator intervened in 2017, by issuing “Law Regulating the Use, Circulation and Trade in Motorized or Wirelessly Powered or Remotely Operated Aircraft.1”

Through that law, the legislator has tried to establish a regulatory framework for the operation of those aircraft that defined their legal and illegal uses, however, the law was largely influenced by concerns related to the non–civilian uses of these aircraft, which may be utilized in armed conflicts or terrorist crimes.

Through this article, “Masaar–Technology and Law Community” attempts to answer some questions related to the legal controls for using those aircraft in Egypt, and the effects of violating the limits drawn by the law.

The “Law Regulating the Use, Circulation and Trade in Motorized or Wirelessly Powered or Remotely Operated Aircraft” prohibits the import of, manufacture, assembling, trading, possessing, or using drones, except after obtaining a permit from the competent authority, which is limited to the Ministry of Defense as stated in the executive regulations, and after fulfilling other conditions specified by law.

This prohibition applies to all entities and persons, including government agencies,

public and private companies, and natural persons. The law has also referred the requirements related to obtaining the aforementioned permit to the executive regulations of the law, which was issued mid–20182.

The law – in its definition of “drones” – has not clarified the categorization of their types or the purposes of their use, but rather, the definition was broad to generally apply the provisions of the law on all types of objects that can fly without a pilot, using any of the techniques.

The definition has mentioned only two controls, related to the technical capabilities of the “drones”;

The First: Related to the capability of loading the “drones” with additional loads, whether they are devices, equipment, armament systems, munitions, or explosives,

or any other threats to the country’s national security.

The Second: Related to the capability of operating the “drones” or controlling them remotely, and the ban on its use has extended to all forms of circulation and use, where there is a ban on importing, manufacturing, assembling, trading, possessing, or trading “drones”, without distinction.

Permit conditions for those in charge of manufacturing or renting “drones”

The executive regulations of the law have stipulated general controls for obtaining a permit to use drones, for companies or entities involved in its manufacture or rental. According to those regulations, the authority responsible for issuing the permit has become the Ministry of Defense.

A set of conditions is required to obtain the permit, for example:

The procedures related to submitting an application for a permit to use “drones” for those involved in manufacturing or renting activities can be summarized in a number of main steps:

The executive regulations have also set some other controls related to the renewal of the permit and the transfer of ownership, as follows:

The executive regulations have referred to some conditions related to the use of “drones” for commercial, sports or research purposes.

Those conditions have focused on the nature of the entity requesting the permit, the persons who will engage in the activity or activities required to be authorized, and the authorities whose prior approval is required to obtain the permit:

On the other hand, the regulations have set some additional conditions related to commercial and tax licenses and exceptions that have been granted for scientific and academic uses of “drones”, including, for example:

Termination or cancellation of the permit to use “drones”

The termination of the permit happens in the following cases:

The permit may also be canceled in the event that the competent authority had rejected its renewal, the authorized activity has ended, or in the event that the permit is revoked; the authorized person is obligated not to dispose of his/her aircraft and to inform the competent authority (Ministry of Defense), within no more than three days, of all the data of these aircraft, until their position is legalized or a decision is issued in this regard.

The law, in general, has granted the status of a judicial officer to members of the military judicial police in relation to the application of the provisions of this law, its executive regulations and the decisions issued in implementation of it. Members of the military judicial control have the power to inspect the accuracy of the entry in the records of the entity authorized to use the “drones”, and to follow up on the practice of the authorized activity.

The Law Regulating the Use, Circulation and Trade in Motorized or Wirelessly Powered or Remotely Operated Aircraft has provided a broad definition of “drones”, as we previously mentioned, however, the executive regulations have exempted some types of “drones” from the requirement to obtain a permit in the event that the following technical specifications are fulfilled:

It should be noted that the executive regulations have mentioned specific methods that must be followed in order to determine the fulfillment of specifications that exempt “drones” from the requirement to obtain a permit; where the regulation obliges the entity requesting the permit to submit an application to the Operations Authority of the Ministry of Defense, and a report from the Customs Authority shall be attached to the request regarding the availability of the specifications referred to in the regulation, and approval is issued after being examined by specialists from the Ministry of Defense within thirty days from the date of submitting the application. 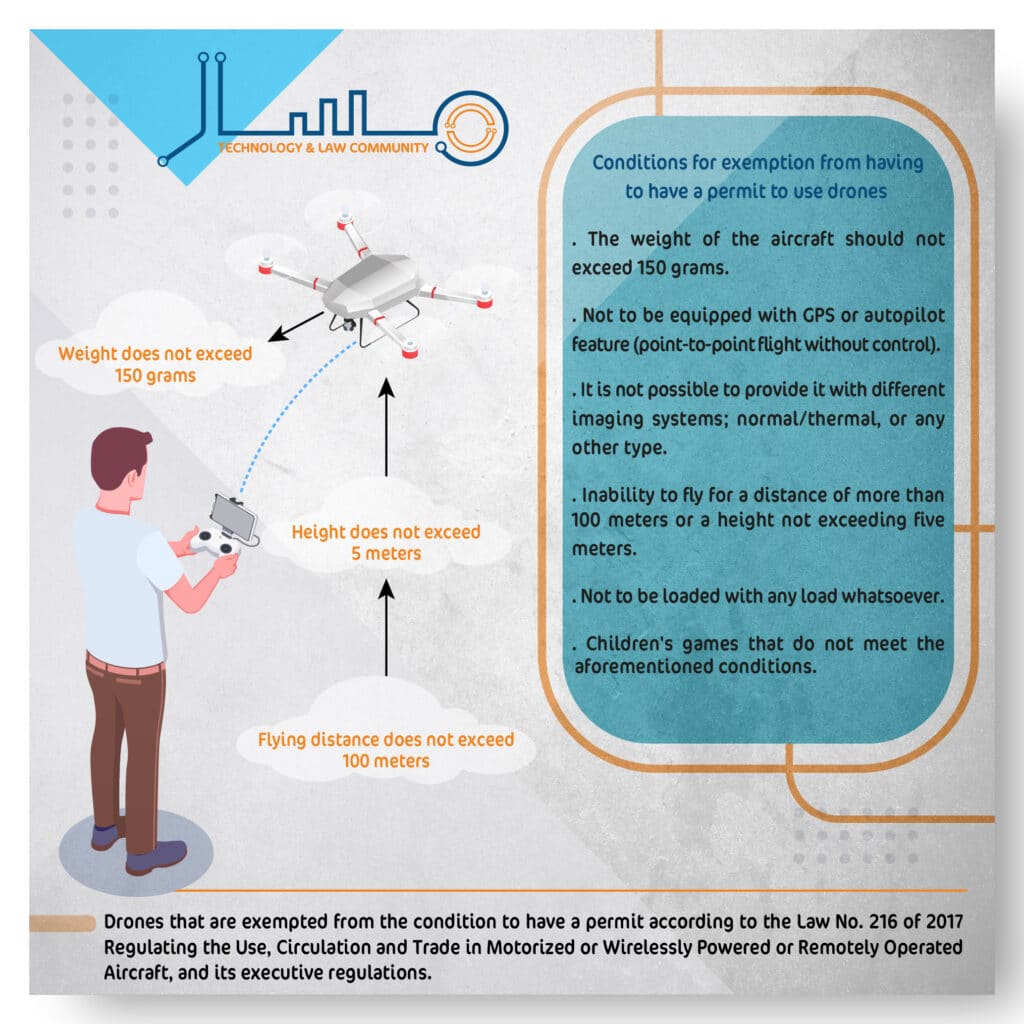