A Suspended Law: Two years after the issuance of the Personal Data Protection Law, its executive regulations haven’t been issued 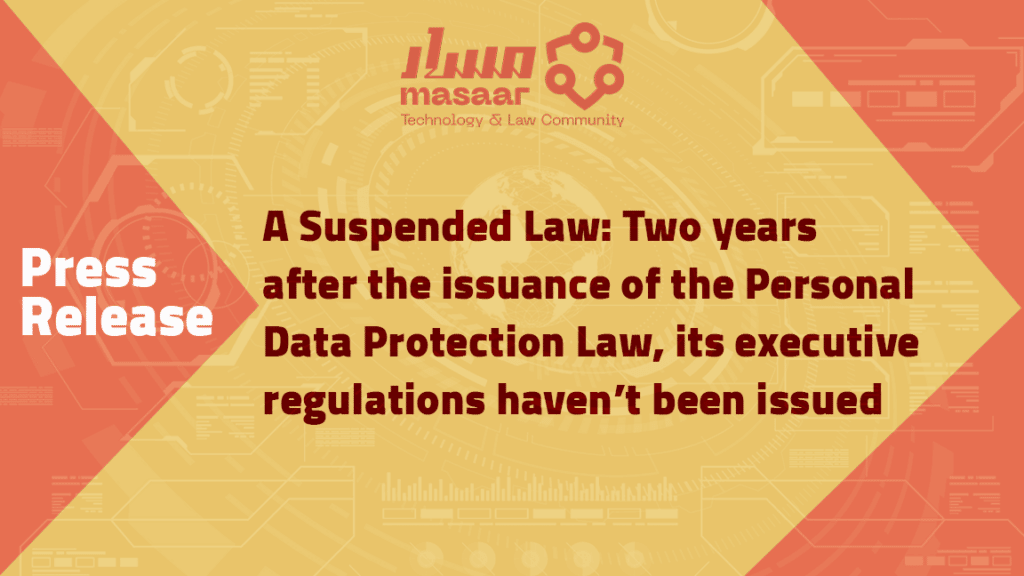 The executive regulations issuance delay led to suspending the PDP law, as its articles have delegated a great number of its procedural aspects to them, including essential details related to some of the objective rules that the law can’t be applied without their ratification. The legislator, when authoring the law, has used a legal responsibility distribution philosophy as related to data protection. It delegated some of these responsibilities to the executive regulations considering the delegated rules to be procedural and thus regulated by the executive regulations. This was one of the points criticized in the law, besides others like high fees for obtaining personal data, no explicit statement of the policies, criteria, and conditions required for transmission, storage, sharing, processing, or exposing personal data abroad, and absence of clear procedural articles regulating the procedures of deletion, correction or editing personal data kept by the storer, the controller or the processor.

The law has expanded in delegating regulatory rules and procedures to the executive regulations, up to more than 18 different points. Masaar had published a policy paper titled “Possible Legislative Alternatives: About the Executive Regulations of the Personal Data Protection Law.” The paper focused on the consequences and effects of delaying the issuance of the PDP executive regulations.

The parliamentarian moves were paralleled by a general orientation of the executive authorities, as the National Strategy for Human Rights, launched by president Abdel Fatah Al-Sisi in September 2021, has included an independent panel for discussing the issues of the right to privacy, thus the 9th item of the first axis “Political and Civil Rights,” was dedicated for the right to privacy. And the strategy has counted among the points of strength the issuance of a set of laws that reinforce the right to privacy, including the Personal Data Protection law.

The delay in issuing the executive regulations also has many consequences. Besides direct effects related to the suspension of the law and its reflection on constitutional rights, the delay has stopped the formation of the Data Protection Center, which is one of the important signs of the actual application of the law’s rules. The Center has the competencies of setting the general policies of storing, processing, and gathering data; issuing required licenses for the entities practicing data-related activities; and receiving complaints related to any violation committed within this framework. There are also high risks for critical economic sectors, especially the companies working in the CIT sector, with the rise of the likelihood of applying the penalties set for service providers. While the regulatory rules set in the PDP law are not in force due to the delay in issuing the executive regulations, the section concerning the penalties, applicable to service providers or the legal entities practicing data gathering or processing in general, is still in force. Any person who has incurred damage related to the application domain of the law can seek litigation, which may lead to severe costs for the companies due to the absence of clarity on the technical conditions and standards which define the limits of responsibility for service providers and other entities, besides the absence of economic exploitation of the data centers industry, and the related commission industries.